Virender tells Sakshi to come clean. Sakshi feigns innocence. Purvi is going to give birth to our baby. Why will I hurt her? Prakashi asks Anjali if she saw how Sakshi was pretending to be Purvi’s supporter. She is attacking openly now. Let’s wait and watch what happens. Virender tells Sakshi not to lie. Purvi has proof against you. Tell me why you have done it. Sakshi asks for proof. I want to see why Purvi has blamed me like this. Virender asks the guard to bring him. Guard brings Bhola inside. Virender asks Bhola to tell him the truth. Who forced you to drop that branch on Choti Mukhiyayin? He aims his gun at Bhola’s forehead. You know you have committed a grave mistake by hurting Choti Mukhiyayin and my baby. There is only one punishment for this – your death! Speak up if you want to live. Bhola falls in his feet and begs for forgiveness. Virender asks him again. Who paid you to do that? Bhola agrees to tell him everything. He looks at Sakshi. Virender asks him to speak up. Bhola takes a step towards Sakshi but points his finger at Prakashi instead. Prakashi and Anjali are taken aback. Sakshi looks at Prakashi.

Bhola lies that it was Prakashi’s plan. She only told me to do that. She even paid me money for it. Purvi and Sakshi look at each other. Bhola asks for forgiveness. Prakashi says he is lying. I don’t know him or his name. bhola asks her why she is lying. Why are you trapping me? I was a fool to fall in your words. You only said that you don’t like Choti Mukhiyayin and wants to get rid of her. I could never go against Mukhi ji otherwise. You gave me money and jewelry as well. Prakashi admits she has not been good but she hasn’t done this. Trust me. Sakshi asks her why she wants to kill their baby. How can we trust you? Prakashi asks Bhola when and how much she paid him. He lies that she came to speak to him on the roof. Prakashi insists that she dint even go there. Am I a fool that I will do that? Sakshi looks at Purvi. Did you take me for a fool who will fall in your trap so easily? I agree that you are very smart. See how I trapped someone in your trap.

Flashback shows Sakshi meeting Bhola and his wife at their home. They admit that Purvi knows everything now. She even promised us a prize if I tell everything to Mukhi ji. Sakshi decides to turn the table around. She offers to help Bhola get his land back. I will also help you get some more land as prize. He agrees. She tells him to take Prakashi’s name when Virender will question him. He readily agrees. Sakshi thinks that Purvi has no idea who she is messing up with. You wont be able to prove anything against me. Flashback ends.

Sakshi thinks that she took her revenge from Ma by blaming her for this incident. You wont be able to expose me ever! Bhola is indeed Bhola (innocent). Purvi tells Virender that Bhola is lying. I had a word with the jeweler as well. He told me that Sakshi ji hasn’t given any bangles for polishing. Sakshi asks her if she still does not believe her. I have forgotten everything and have made a fresh start. Let me know if you want me to leave. Don’t make me a killer of my own baby. Virender tells Sakshi that Purvi only intends to get the facts right. He tells Purvi to call the jeweler home asap. Purvi calls Govind ji who tells her that he is on his way. Prakashi tells Virender she isn’t lying but Virender walks away. Purvi follows him. Sakshi wipes her tears while looking pointedly at Prakashi. Anjali tells Prakashi she knows she hasn’t done anything this time. Prakashi says Sakshi is stuck so she wants us to be blamed for her misdeeds. Anjali asks her what they will do now. Prakashi says we will do something.

Govind ji reaches haveli and greets everyone. He admits that Sakshi did not give him any bangles to polish. He adds that she had given them to his brother. I had no idea about it as I was not at the shop since past few days. There was a confusion. Sakshi thanks him for clearing the confusion. Purvi asks him how Bhola’s wife got same bangles as Sakshi. Govind ji lies that Prakashi had asked him to make a copy. Virender glares at Prakashi who repeats that she has not done anything. Sakshi interrupts her. You wanted to prove it that I am Purvi’s enemy and that I want to hurt the baby. I never thought that you will stoop so low to take revenge from me. Prakashi asks her why she is lying. We know each other since so many years. Both Bhola and Govind ji are lying. Virender says you are the only one who is honest here. She shouts that it is true. I don’t know why but both these men are lying!

Sakshi looks at Purvi and thinks that anything is possible with money. I paid jeweler to lie as well. What will you do now? Purvi feels that she was doubting Sakshi for no reason when Ma is at fault. I was so mistaken. She apologizes to Sakshi for doubting her. Sakshi says it was more important to find the real culprit. It has happened now. Now we all know who the real culprit it. I am only feeling bad about the fact that you dint think before blaming me. You know how much she hates you, me and Mukhi ji. Who are we when she can do so much to hurt Mukhi ji? How can I hurt you when you have Mukhi ji and my baby inside you? Virender agrees. I am at fault too. You can punish me. Sakshi says I will punish Ma and Anjali for this. Throw them out of this village or they will try to harm our baby again! We must throw them out of this village! Prakashi tells Virender Sakshi is lying. She is trying to fool you. This is her game. I don’t know why she is doing this but she is the mastermind here. This manager and jeweler wont be at peace! Virender tells her to stop her drama. Sakshi is right. All of us are in trouble because of your dramas. We have had enough. You must leave this haveli and village now! Sakshi says we will first apply black polish on their face and we will take them around Rewari like that first. We will send them off then. Purvi tells Virender not to do this. She is your mother after all. Virender says this should happen with such a mother only. Any stepmother should think before doing such a thing again! She tried to hurt you and blamed Sakshi. It is enough. A son can forgive but Mukhi and Badi Mukhiyayin cannot! Sakshi has every right to punish her as she wants. I am with her on this. No one will interrupt her now. Virender and Purvi leave.

Prakashi walks closer to Sakshi who tells her that this is the first instalment for what she has done to her for 5 years. Just wait and watch what will happen now. She asks maid to bring black polish and applies it on Prakashi and Anjali’s face. Sakshi thinks that she killed 2 birds with 1 stone. They will leave Rewari and no one will doubt me.

Purvi is speaking to someone on phone and comes on terrace. Sakshi walks up to her from behind and raises her hands (to push her). I will take my revenge from Purvi today! 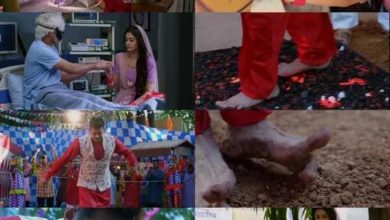