The Episode starts with Aykam teaching dance to Nehmat. She says I don’t know dance, is it imp. He says dance is not imp, its imp to come in arms by this excuse. She says then we will dance, but remember, your feet shouldn’t stop. He lifts her in arms. They romance. Udaariyaan…plays… Naaz says this hairstyle will suit you a lot. Aykam’s mum thanks her. She says I will call you when I have to go to the party, what are you wearing for Ronnie’s party. Naaz says I m not going, Ronnie’s friend circle is different, everyone will enjoy.

The lady asks her to go with Nehmat and Mallika. Naaz says no, they have someone coming with them, Mallika doesn’t want to take me, exams are coming, I have to study, let it be, I m happy. The lady says wait, let me think. Naaz recalls Jasmin’s words and says one silence, hundred joys. Mallika shows her dress and heels. Nehmat asks her to get ready soon, Aykam said he will meet them at the venue. Mallika jokes.

Shelly says Nehmat’s dress has come. Mallika goes to get ready. Naaz enters the room. She recalls Mallika’s words. She breaks the heel and leaves. Nehmat compliments Mallika. Mallika says look is incomplete, I will wear this and show, everyone will look at me. She stands and falls. She checks the broken heel. She asks what happened to this, I bought this today. Naaz gets ready. Shelly asks why aren’t you getting ready with Nehmat and Mallika. Naaz says you can make the best hairstyle. Naaz recalls Aykam’s mum asking her to attend the party and enjoy with Aykam, Nehmat and Mallika.

Aykam waits for Nehmat. He calls her. Naaz comes here. Aykam greets her and asks where is Nehmat. She says I think they wont come, Mallika’s heels issue. He says strange, she isn’t answering. She asks can you come with me, I was feeling odd to go alone. He says Nehmat will be coming. She says she won’t come. He says she will come if she has promised me, I can bet my life. She says fine, then I will wait here. He says fine.

They wait. She says its late, Nehmat would have come if she had to come. He says she will come, I trust her and my love. He smiles seeing Nehmat coming. He asks Naaz to see. He lifts Nehmat in arms. Naaz looks on. He says I told you, she will come. He kisses Nehmat and goes with her. They all go to Ronnie and wish her. Ronnie says you guys are late. Aykam says all credits goes to Mallika. Mallika says thank God that I have come.

Nehmat says she is wearing mismatched sandals. Naaz also wishes Ronnie. He asks her to have fun. Naaz’s friends come. Naaz’s friend says that guy Varun is really rich. She goes to get drinks. Naaz sees Varun. The girl collides with Aykam and flirts with him. He says that’s my girl, I m really sorry, she is waiting. She sees Nehmat and says sorry. He smiles. Mallika says he was flirting. Nehmat says he won’t get anyone like me. He says she is making you jealous. Nehmat and Aykam do shayari. Mallika says you guys are so cheesy. He says we are madly in love. Nehmat says we both love each other and trust, we are not jealous. Naaz says I don’t agree. Mallika asks how is this possible, we shall take a jealousy test. Nehmat and Aykam say fine. Mallika says pretend you both are single, we will see who gets more mobile numbers. They say done. Mallika says whoever gets more numbers will win. Nehmat asks what will the winner get. Aykam says winner can make the loser do anything. They go. Mallika says I have to see what they do.

Naaz asks Mallika don’t you have any BF. Mallika says no, I have a class. Aykam’s mum asks Randhawa not to drink. She talks about Mallika and Gautam’s alliance. He says Mallika is just 21 years old, why are you in hurry. She says she doesn’t have to make career, I have to get my children married in good families. He drinks. She says you don’t care for Mallika. He says ask Aykam if he cares. She says he will become a police officer in one month. He says Nehmat and Aykam love each other.

She says yes, they are childhood friends, Nehmat is from a good family, else I would have not agreed, Rupy has raised her with love. Mallika says you both got four numbers, it’s a tie. Naaz asks don’t you feel jealous. Nehmat says no, I know Aykam is mine. Aykam says yes, we are made for each other. Naaz says tell me, who is the winner. Mallika says Aykam and Nehmat are childhood friends, but who proposed first. They recall their childhood and smile. 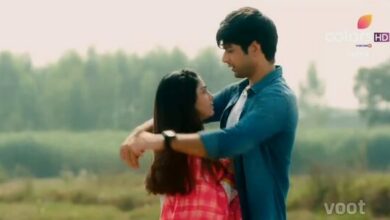