The Episode starts with Lakshmi telling Viraj that she was in love with Rishi, when they were getting married. He asks when did you fall in love with him. Lakshmi says when we came to Mumbai, after our parents’ death, Chachi brought us here and I agreed to marry anyone for soul peace of my father. She says but I was destined to marry Rishi. She says you said right, he was arrogant, when I met him for the first time, he broke his promise. Rishi hears her. Lakshmi says that time I saw that Rishi, which you people see, but later I see the true Rishi. She says Shalu tells that God stopped making Devtas like guy now, and says he is very good. She says he always supported me, and says one guy tried to maligned my image, but Rishi supported me without questioning at me once. She says only a true person can do this and says after doing so much for me, he never show off. She says she didn’t know about love before, and didn’t know when she fall in love with him. She says she used to get dreams of him, and tells that she will stay with him even when their hair turn white. She says Rishi said that I am made for him, and my whole world is you. Viraj says yes, you really love him and asks do he love you too. Lakshmi says you shall ask him. Viraj says Rishi is not here and asks did he tell you, I love you. Lakshmi says said many times, but not my mouth, whatever he does for me, it is visible. Viraj asks what does he do? Lakshmi says what a life partner do, and says he is my Saarthi. She says sometimes I feel that he loves me more than I love him. She says he even remembers what I told him on date and he fulfilled my wish. He asks what? Lakshmi says he brought chole kulche for me. She says the reason is Rishi for my love for him, and says our relation is special due to him. He asks why are you smiling? Lakshmi says Rishi covered me with blanket when I was unwell, bandaged my injury and scolded me with love, and didn’t let me get up from the bed. She says my Bau ji used to say that I will get the life partner who will love me more than myself, and says his prayers’ fruit, I got Rishi. Viraj asks what did Rishi do for you? Lakshmi smiles. Viraj says Rishi might have told you that your smile is beautiful. Rishi thinks why Viraj is telling such things. She says Mummy ji might be searching Rishi. Viraj says sorry if you think that I am crossing the line. She says I won’t let anyone do. Rishi smiles. They leave.

Rishi comes to Malishka. Malishka says I don’t love you, as you love Lakshmi. Rishi says Malishka. Malishka says she felt cold, so you switched off AC and taken care of her and even bandaged her foot. He says yes, she was unwell and that’s why I did. Malishka says you love her. Neelam comes there and hears them fighting in bathroom. Malishka thanks Rishi for bringing her there, and says I heard everything whatever she told. They come out of the bathroom. Rishi asks her to listen. Neelam sees them.

Shalu asks Ayush if anything happened? Ayush asks if she is possessive about him. Shalu says Neha wants to woo him. Ayush says our Neha and gets happy. He says my demand is increased. Shalu asks if Neha is Ms. India or Ms. World. She asks him to woo any other girl and says Neha is not right for you. She asks why are you not believing me? Ayush says I can like her, and says you are not girlfriend material, just friend type. Shalu asks from where I came? Ayush says it happened with me, and says you will propose me. Shalu says it is not like that, you are good dewar of my sister. Ayush says you started. He asks her not to save him from Neha. He goes from there. Shalu thinks what to do?

Rishi says Mom. Neelam says I will not ask whatever was happening, and says stop it. She says Lakshmi and Viraj had come here searching you. She tells Malishka that she didn’t expect this from her. She tells Rishi that this is Lakshmi and his room, and he shall have decency. She says whatever you both want to do, can’t do it here, this is Lakshmi’s room as well. She says don’t make anyone feel ashamed, while doing such foolishness, especially me. Malishka goes from there. Neelam asks Rishi to respect the relation, in which he is in. She says I didn’t ask you to forget Malishka. She asks him to respect his marriage and Lakshmi until she is here. She says it is our helplessness, but we shall not lower our character. She says you are not that of a person, remember this. She says I called you to get the thread tied by Pandit ji.

Ayush comes to Neha and asks why did you call me? Neha asks him to get supari box from the rack. Ayush asks Sudeep to get it. Neha gets angry. Ayush says ok, I will take the box down. Neha says now he is trapped and thinks that flour box will fall on us and then filmy romantic scene will begin. She thinks to message Mom to arrange dress for her. Ayush gets Shalu’s message asking for his help. He thinks to help Shalu. Ayush signs Sudeep to take out the box. Sudeep takes off the box and the flour falls on him. Neha thinks he is Ayush and pours some flour on herself. She says we are together and hugs him. Rano comes there and shouts, asking who is he? Sudeep tells his name.

Precap: Lakshmi says you are friend of Rishi. Malishka says not friend, I love him from forever. Lakshmi says Rishi is my husband and suhaag, how can you think like this. Malishka says it all happened due to you. Later Lakshmi and Malishka get stuck while crackers are bursted. Ayush throws jacket at Rishi. Rishi catches it and runs to save Malishka. He then sees Lakshmi scared and trying to save herself. 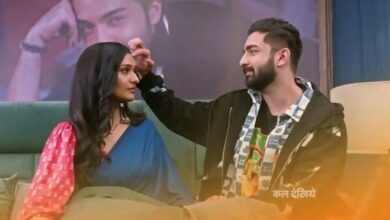 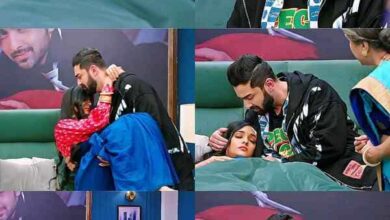 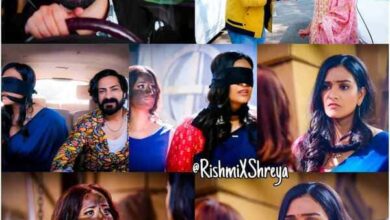 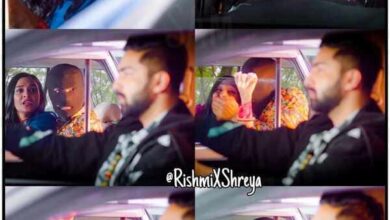