Sarla says she has warned her a lot of times to never take the name of the luthra’s because they have all forgot them and even Preeta has, Bi Jee questions Sarla why is she scolding Janki because she must not look at her outer appearance but listen to her heart as she still yearns for them, Sarla replies it is not the case as she has forgotten them, Preeta spent two years away from this city to forgot, she desires that Preeta should even forget the road which leads to their house.

The auto of Preeta stops in front of the Luthra Mansion, Preeta seeing the house recalls the day when karan exclaimed that Preeta and Karan will never be together ever again, he then kicked her out of the house, she manages to step out of the auto, while walking towards the house she recalls how once Karan would not even feel like leaving her side, she sees the name plate of the Luthra Mansion, then recalls how Mahesh papa explained Prithvi has taken control over everything, he requested her to save everything, she also remembers the promise which karan made that he will never leave her hand, he explained it would be really difficult for him to live alone without her when she mentioned there is no need for him to ever think of living alone, she opens the gate of the Luthra house, slowly walking in when the guards stopping her ask who is she and who does she want to meet, Preeta questions about the old staff when the guard explains they have been changed and now they are the ones who have been working since the past one and half year, the guard says she must have an appointment letter if she desires to meet anyone from the family, or the permission of Prithvi Malhotra, however they hear the car of Prithvi arriving so request Preeta to go out, she hides behind the wall when Prithvi steps out of the car, Preeta thinks the last time they got him thrown in jail so how did he come back, she plans to surely find out what happened in the last two years.

Prithvi realizes that someone ran away, so asks the guards if someone came, they explain that a women came however she was not allowed to go inside, Prithvi walks out of the house, he thinks of Preeta, Prithvi says that he has thought of her after two years but now it would be better if she never came in front of him otherwise, he would do to her what she herself can never think off.
Preeta climbing the back stairs, opens the window to enter the house, just a she did in her GrehPerwash when Karan left her on the road side all those years ago, she takes her step forward reliving the old memories, she walks into the hall in a state of tension, she starts remembering how she used to live in the same house as a member, but the request of Mahesh to save his house, from Prithvi who has captured everything and even Rishab has not come.

The doorbell rings, Preeta immediately hides, Ganesh comes running to open the door, Prithvi explains that it took him thirty seconds and if he doesnot come into the house within five minutes then Ganesh would be out, he explains that Sameer got ill so he had to take him to the hospital, Prithvi explains he is the one who pays Ganesh so he works for him and not them, Prithvi sits on the sofa when Ganesh places an alarm bell which he rings so the entire Luthra family, comes to stand Infront of him, he questions why do they not have any pooja in this house, Kritika replies that it is because he doesnot like it, Prithvi replies before he just had a suspicion that she was a duffer but now ever since she stood by Preeta in deceiving him, he knows it for sure, Prithvi then questions Sherlin who replies that they would have to pay the Pandit jee, Prithvi explains this is the reason because the Pooja is held so the money comes into this house but every time the pandit comes to their house, he instead takes the money and he only likes it in his hand, Prithvi standing replies that now no doctor would come into their house without his permission because he has spent a lot of money on their expenses, including Mahesh Luthra but now he would not spend any more amount, Kritika tries to explain Sameer had a really bad fever so he needed a doctor, Prithvi standing in anger exclaims they should have given him some tablets because he would not have died with just a fever, Prithvi leaves exclaiming that all the Luthra’s should be thrown in the bin, Rakhi leaves informing Karina that it is time for her to give Mahesh his lunch, Kritika questions Ganesh why did he tell Prithvi about the doctor, Ganesh replies he got scared and apologizes. Preeta standing behind the curtain wonders why is Prithvi acting as the boss of the house and everyone is really scared of him, how did he get control of the financials of the Luthra family.

Rakhi explains that she now desires to feed Mahesh jee with her own hands but she knows that Mahesh is in the basement and there is not enough light there, Sherlin replies she would feed Mahesh herself as Rakhi knows that nurse is really ill tempered, Sherlin takes the plate however prithvi stops her informing that whenever Mahesh sees anyone in his room, he gets irritated so if he in anger harms Sherlin, then he would not be able to afford her treatment, Dadi cries saying her son has lost all the ability to think, prithvi replies Mahesh just made one right decision by giving him the authority to make all the decisions of the business and their property, thanks to him as he has kept them all alive. Karan walks over to the family, he asks Dadi what has happened, however Dadi doesnot say anything when Prithvi walking down exclaims would she rejoice at the news when her son has gotten mental, this is why she is crying, Karan warns him to watch his tongue, Prithvi asks if Karan did not hear that his father has been declared mental because he acts like an animal and hurts everyone, Karan warns him to not take a single word against his father, prithvi asks what does she think because Karan is just a normal employee and he is the one who takes the decisions of Shining bright, Prithvi mentions he knows how much this job is important for karan because he needs to keep an eye on him but if karan ill-treats him ever again then will be kicked out of the house, Prithvi calling Ganesh to give karan dry fruits so he knows how is the owner of the house.

Karan exclaims that if Rishab was here then he would have seen what Prithvi says, Prithvi explains that till Mahesh is alive he is the owner of this house but after he dies the property would be divided equally between both the brothers, Karan gets really mad when Rakhi takes him away, however Prithvi warns them to make karan remember, Kritika tries to leave when Prithvi stopping her asks if she forgot that he is her husband who loved her a lot but she lost that right when she deceived him with Preeta and he will not forget it for the rest of his life. 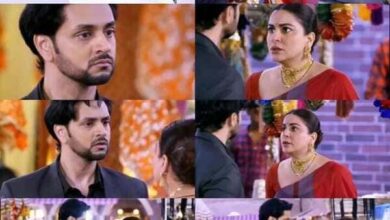 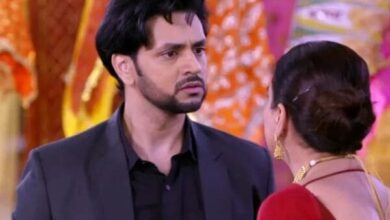 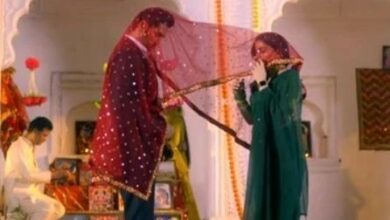 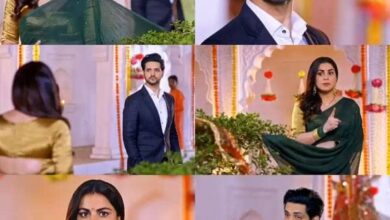