The Episode starts with Fateh saying whatever you and family members saw was a lie, that rituals, that pandit, everything was fake, did you wear any Chuda, mangalsutra or sindoor. Tejo says but you loved Jasmin. He says yes, I loved her a lot, I left everyone for her, I cheated you, my eyes opened when I got to see her real truth, she was behind Jass’ return. Tejo gets shocked. Fateh says I started hating her. Jasmin says stop it, don’t link my name with Jass. He says shut up, we felt she is kiddish, I didn’t know that its her conspiracy, so I didn’t marry her or go to Canada. Jasmin asks are you happy now to tell her the truth. She says Tejo, he came here to ruin your life, he burnt my passport and dreams, he came back to you, he doesn’t know what he wants. Fateh and Jasmin argue. Tejo stops Jasmin. She says I don’t want to hear anything, please go. Fateh says I asked you not to trouble Tejo again. Jasmin says you ruined my life, I will take revenge on you, Fateh doesn’t love you, he came here to make me jealous. Fateh says stop it and leave us alone. Jasmin curses Tejo. She says ask Fateh, do you believe him. She curses Tejo even more. Fateh makes Jasmin out of the house. Jasmin climbs the gate and says I will never let you stay happy, I will keep coming here till my revenge gets fulfilled. She goes. Fateh turns towards Tejo.

Fateh says Jasmin had hurt you a lot, I couldn’t see anything, I wish I could see that time, I can’t bear this burden for long, I can’t live with this guilt. Tejo says enough Fateh, you are telling this to me now, what shall I do, shall I applaud or get happy, are you expecting me to forgive me, this won’t happen, I had ruined my life to set up your and Jasmin’s world, you said its a lie, you thought I will hug you. He says I didn’t come with any hope, so I was repenting for my sins. She asks why didn’t you go home. He says I know I did wrong with them and you, if I went home, then they would have united us, I always tried to go away, but found you close, sometimes in the market and petrol pump. She asks did you see me at the petrol pump. He says yes. She cries. He says I didn’t had courage to come in front of you, I had nothing to tell you, I came here to Rampur, I had hidden myself from Angad and you, then I decided to go from here, but Sharma Sir stopped me, I left from here and then came across Jasmin, I got to know that Jasmin wants revenge on you, trust me, I didn’t come here following you, I know I have done big sins, it can’t be forgiven. She asks why are you telling this to me. He says I felt you love Angad, I got to know the truth today, you don’t love him, you didn’t get engaged to him, why did you fake the engagement, tell me the reason. She cries. She says I had no other way, I had to do this for everyone’s happiness. He says you always sacrificed your happiness for others, now my guilt got more. He gets on his knees and says it happened because of me, I want to tell something, the time we had spent together was true like you, there was no lie in it, that time gives me peace in loneliness, I think you also think of it, I m saying this today, you should know, Jasmin and I are getting punished, I don’t want your decision to be a result of misunderstanding, Angad wanted me to not tell you all this but I think you should know. She asks did Angad know this. He says yes, I told everything to Angad, but he loves you, he cares for you, he wanted me to stay away and not hurt you, he did right. She says yes, you do right and he does right, you both are men, you can decide for a woman, you felt you should go away so you left, Angad felt I will stay happy with him so he claimed his right, don’t think so much for me, I can decide for my life, I m not any helpless woman, who wants a man’s support to live, you aren’t that man whom I loved, who is hiding from everything for guilt, repenting means to face the situation. She goes. He leaves. Angad is at office. He recalls Tejo’s words. The man gets a tea and insists him to have it. Angad asks are you mad, will you tell me what will make me feel good. Tejo says thanks Naresh, you may go.

She asks Angad can’t you have a tea against your wish, how did you hide about Fateh and Jasmin, by what right, you want to decide about my life, you stayed silent and didn’t tell me about Fateh. He says I thought its right for you. She says I m not a helpless woman who can’t think right for me, I will decide it. She argues. She asks why did you do this. He says I can’t see you in pain, if Fateh does the same with you, then what.

She says Fateh had tolerated everything so that I don’t know about him, he thought of my happiness, he faced many struggles. He asks what about his lie, its a sacrifice, my lie is a cheat, because Fateh is in your heart, you love him, not me. She says think anything you want, stop caring for me, please. He holds her hand. She leaves.

Rupy comes home and asks everyone to see what he got. He says its special Revdiyaan, Tejo likes it a lot, don’t know she will be with us on Lodhi or not. Gurpreet says we don’t know we will celebrate Lodhi or not, Fateh didn’t call us, I will send til laddoos for Fateh through Bunty’s brother. Khushbeer asks did your son give the address. She says no, I won’t make the laddoos. Biji says we will celebrate for other children. Bau ji says Tejo loves laddoos. Khushbeer says make it for Tejo, I will call them.

Angad comes home. He asks Babli where is Tejo. Riya says Tejo left. He asks left? Tejo comes home. Angad gets Tejo’s letter. She thanks him and asks him to take care. She writes, I have seen a good Nanny for Riya, its time we handle ourselves. Angad gets angry and says you should have not gone without telling me. Tejo knocks the door. Angad cries. Satti opens the door for Tejo.

Precap:
Angad scolds Fateh. Fateh comes to Tejo’s house. He says I will make myself capable for you and your love. Jasmin says I will not leave you both. She burns Fateh and Tejo’s pic. 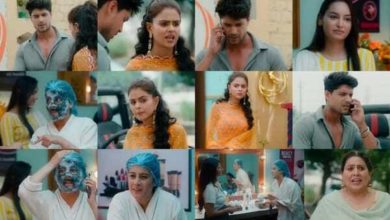 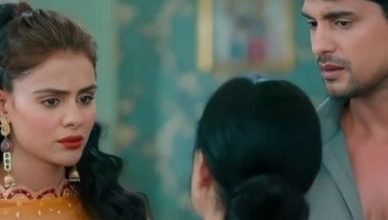 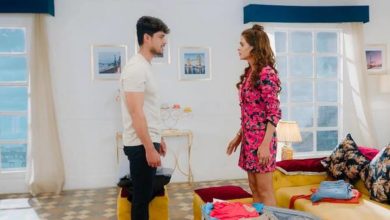 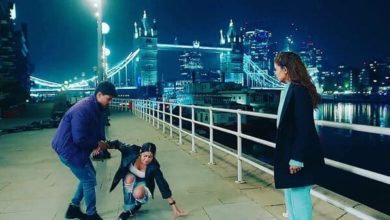