Abhi saying you should not marry Aarohi, this is a sign that Akshu loves you. Abhi sees the pic and recalls Akshu saving him from the fire. Ehsaan tera….plays… Akshu is on the way. She says I have to do this. Suwarna says we will pick Aarohi and Akshu. She doesn’t see Akshu going. Aarohi says let me go, make the entry quickly. The guard says there is no office here, its vacant. She worries. He says your address is right, but there is nothing here. She asks what, is there any other building of this name. He says no, can you see someone, you can go inside and check if you want. She cries.

Akshu comes home. She hides from Kairav. Kairav turns to see. Neil says mum will understand, ask Aarohi why is she lying to everyone, Akshu and you love each other, ask Aarohi why is she trying to manipulate, I m shocked. Abhi yes, I will ask and get an answer. Neil says yes, you have a right to know it from Aarohi. Abhi asks who Aarohi, I don’t care what she did and why, I just have to talk to Akshu, I love her, she loves me, she saved me, her sister lied, but she knew the truth, why did she do this with me, with us.

Akshu hides and goes to her room. She calls out Kairav from the window and says send coconut water for Aarohi. He asks when did you come. She says long time back. He says we will come and see Aarohi. Abhi leaves from the house. Harsh calls him out. Neil smiles. Akhilesh calls Kairav for some work. Kairav goes. Akshu calls Aarohi. Harsh says Manjiri is coming, where are you going. Abhi says I messaged her. Harsh says its your marriage. Abhi’s bike doesn’t start. He angrily throws the helmet. He goes to the car. He shouts seeing all the vehicles not working. He leaves. Harsh sees Neil smiling and asks what’s going on.

Abhi runs on the road. Akshu worries. Suwarna and Dadi reach the parlor. Akshu calls Suwarna and asks where are you. Suwarna says we just reached the parlor. Akshu says but we just came home, there was much crowd there, come back home. Dadi asks why didn’t you get ready. Suwarna says you should take care. Akshu says sorry to lie, I will ask Aarohi the truth today. Abhi thinks I want to know the truth. Aarohi is on the way. She recalls everything and cries.

Harsh catches Neil and asks what’s going on, what did you tell him, its about Abhi’s life. Neil says he will come and tell you, wait for some time. Servant comes and says Kairav has sent coconut water. Akshu says no thanks, we just had coffee. She says I had to lie because of Aarohi.

Abhi runs on the roads. He reaches Goenka house. He enters. He goes upstairs. Akshu turns to see. Jaaniye….plays… Abhi goes to her room. She opens the door and sees him. He cries. Aarohi gets angry and says I will see that man later,I will go home and save my marriage. Manish and Akhilesh don’t see Abhi. Akshu sees them and pulls Abhi inside the room. She says you here, how. She stumbles and falls in his arms. Jaaniye….plays…. They have an eyelock.

Precap:
Abhi says you have time till 4pm, come to the sunset point, else you don’t know what I can do. Akshu runs. She sees the time. She shouts Abhi, where are you, I love you Abhi. She gets shocked seeing him. 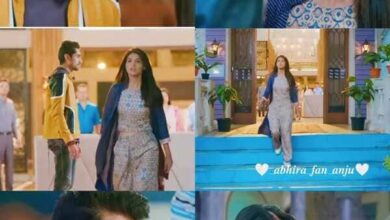 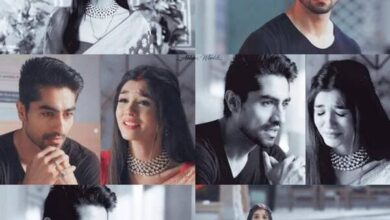 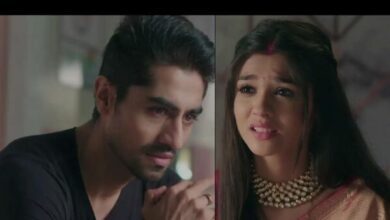 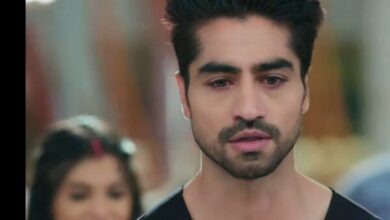