Aparna warns Malini to dare not call her maa as she is only Imlie’s mother from hereon. She say there are 3 conditions for being a mother, sacrifice, motherhood, and forgiveness, and only Imlie followed all those 3 conditions and not Malini; Imlie sacrificed her love for Malini, showed motherhood to Malini’s child, and sacrificed repeatedly for T famiy’s happiness;

Anu risked Imlie’s dignity to satisfy her daughter’s ego without thinking if same thing had happened to her daughter, so she will file case against Imlie; Malini considered Imlie as her sister and even then sold her sister’s dignity; Malini was a girl who never let her mother taunt Imlie, but now she hates Imlie.

Malini says she did it because of Imlie, Aparna saw everything and even she will not accept it, she did it for Aditya. Aparna asks that is why she intoxicated and misused him and try to separate him from his dear ones, love cannot be won but gained, she lost everything today.

Malini says she cannot lose and Imlie lost instead. She tells Aditya that she did all this for him and she knows he loves his family will not accompany her, so she will adjust with his family as she just wants to stay with him. Imlie walks away from there followed Arya and his family.

Malini tells Aditya that Imlie left him again, but she is always with him and will never leave him.

Rupali asks Aditya if he saw how evil Malini is and is misusing her baby to get him. Pankaj says even after so much happened, Malini shamelessly is claiming her right, he will not let this happen in this house.

Radha says Aditya has to take a decision now. Aparna says Aditya knows truth and until he takes a decision, nobody will return to this house. She walks away with whole T family.

Imlie sits on a park bench crying. Aryan with his family stands nearby. Narmada says Imlie was staying with them for so many days, they didn’t realize that she is favoring them by showering love on them, etc. Aryan asks them to go, he will bring Imlie along later. He walks to Imlie.

Aditya also walks to her. Aryan says she must want to talk to Aditya, so he will take maa and didi home. Imlie watches him walking towards his car. Ye Duriyan.. song plays in the background. Narmada meets Aparna and says she is going home with her children as her family needs her attention, she can call her whenever she needs her help.

Aparna thanks her for supporting Imlie and asks her thank Aryan for helping and protecting Imlie. Narmada and Arpita walk away.

Aditya kneels down in front of Imlie, apologizes her with tear yes, and requests to punish him as he doesn’t deserve her punishment; he did a big sin of not trusting her and trusting a traitor Malini instead; he is a murderer who killed Aditya who promised to love and be with her for 7 lives. He holds her hand and beats himself.

Imlie asks him not to touch her and walks away. She stumbles and falls down in dirt. Aditya runs and lifts her up asking if she is fine. She says she is fine. He tries to clean her dirt. She shouts not to touch her as he threw dirt on her which cannot be cleaned, reminding him that he humiliated in front of whole office staff.

He says he accepts his mistake and seeks forgiveness. She says she is her mother and Dadda’s pride, but his allegations ruined her dignity and its irreparable; she doesn’t need his apology and doesn’t have anything to offer him. Aditya breaks down and tries hard to show some expressions but fails.

Precap: Aparna tells Aditya that he wanted to leave them for Malini, now she will leave him if he even takes Malini’s name. Aditya holds Malini’s hand and walks in.

Anupamaa : Marriage on the Cards for Anuj & Anupama ! 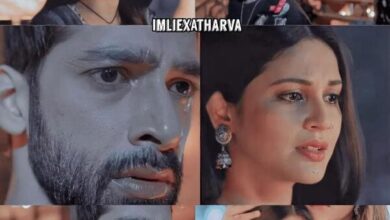 Imlie : Cheeni Attempts to Get Imlie into Trouble !